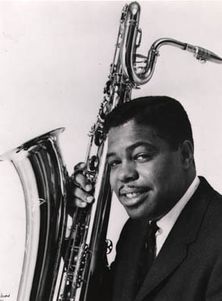 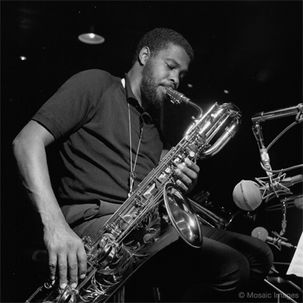 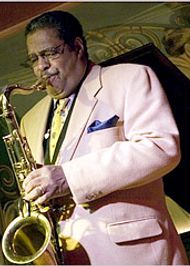 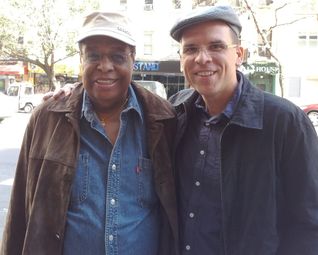 Humble, kind, a quiet master who at 82 years young, continues to tirelessly perfect his craft with you and I the listener profiting from such tenured dedication. Jazz critic of the New York Times Ben Ratliff says, “Charles Davis is the kind of musician worth paying attention to, he owns the secrets of the past."

In Charles' more than 60 years on the scene, he has performed with such jazz legends as Billie Holiday, Ben Webster, Dinah Washington, Clark Terry, Sun Ra, Archie Shepp, John Coltrane and Kenny Dorham, to name a few.

From Mississippi where he was born, to Chicago where he was raised, to New York where he lives, and the world he now travels, Charles learns from all that surrounds him so that he and his music continually evolve. As a composer, arranger and performer, his intent is to probe, conquer and communicate the mysteries of the music.

From Charles’ website you get a glimpse of what has made him such a treasured artist.  Looking back:

50’s -- Played in the bands of Billie Holiday and Ben Webster, Sun Ra and Dinah Washington. Performed and recorded with Kenny Dorham with whom he had a musical association that lasted many years.

60’s -- Performed and recorded with Elvin Jones and Jimmy Garrison, Illinois Jacquet, Freddie Hubbard, Johnny Griffin, Steve Lacy, Ahmad Jamal and worked with Blue Mitchell, Erskine Hawkins, John Coltrane, Clifford Jordan, among others. In 1964 he won Downbeat Magazine’s International Jazz Critics Poll for the baritone saxophone. Performed in the musical production of “The Philosophy of The Spiritual – A Masque of the Black” under the direction of Willie Jones and the auspices of Nadi Qumar. Taught at PS 179 in Brooklyn and was musical director of The Turntable, a nightclub owned by Lloyd Price.

70’s -- Member of the cooperative group “Artistry in Music” with Hank Mobley, Cedar Walton, Sam Jones and Billy Higgins; was the co-leader and composer/arranger for the Baritone Saxophone Retinue, a group featuring six baritone saxophones; made European tours of major jazz festivals and concerts with the Clark Terry Orchestra; and toured the USA with Duke Ellington’s Orchestra under the direction of Mercer Ellington. Musical director of the Home of the Id nightclub, presenting such artists as Gene Ammons, Randy Weston, Max Roach, as well as producer of Monday Night Boat Ride Up The Hudson presenting, among others, Art Blakey, George Benson, and Etta Jones. Made TV appearances with Archie Shepp, Lucky Thompson, Ossie Davis and Ruby Dee.

80’s -- Performed and recorded with the Philly Joe Jones Quartet, “Dameronia” and with Abdullah Ibrahim’s “Ekaya” in the United States, Europe and Africa. Toured Europe with the “Savoy Seven Plus 1: A Salute to Benny Goodman.” With his own quartet, performed in Rome, at the Bologna Jazz Festival, Jazz in Sardinia Festival, and the La Spezia Festival. Was the musical director of the Syncopation nightclub. Performed in the movie, “The Man with Perfect Timing” with Abdullah Ibrahim. In 1984 he was named a “BMI Jazz Pioneer.”

90’s -- Musical librarian for Spike Lee’s “Mo Better Blues”; performed at the Jamaica Jazz Festival with Dizzy Reece and returned to perform with Roy Burrowes; was in the Apollo Hall of Fame Band accompanying such stars as Ray Charles, Joe Williams, Nancy Wilson, among others. Toured Holland saluting the music of Kenny Dorham; was the guest artist at the 12th Annual North Carolina Jazz Festival at Duke University. Featured soloist of the Barry Harris Jazz Ensemble and performs in clubs with the Barry Harris/Charles Davis Quartet. Recorded and toured Europe and Japan with the Clifford Jordan Big Band. Was the tenor saxophonist and a major contributor of musical arrangements with Larry Ridley’s “Jazz Legacy Ensemble” which appeared at the Senegal Jazz Festival, performed concerts and conducted clinics, seminars and master classes. This ensemble also appeared in an ongoing concert series at the famed Schomberg Center for Research in Black Culture. Was a featured artist at the Amman, Jordan Jazz Festival, arranged by the American Embassy. Was also the featured artist in clubs and concerts in Paris, Toulouse and Hamburg. Appeared at the Williamstown Theatre Festival in an original production of Eduardo Machado’s “Stevie Wants to Play the Blues,” directed by Jim Simpson. Performed in the Three Baritone Saxophone Band with Ronnie Cuber and Gary Smulyan, which toured Italy, appeared at the New Orleans Jazz Festival, the 1998 JVC Jazz & Image Festival at Villa Celimontana in Rome, and Ronnie Scott’s Jazz Club in London. Charles was also a featured soloist at the 1998 Chicago Jazz Festival. In June 1999, he performed with Aaron Bell and the Duke Ellington Tribute Orchestra at the Jackie Robinson “Afternoon of Jazz” Festival in Norwalk, CT. Featured artist at the 1999 Jazz & Image Festival at Villa Celimontana in Rome.

00’s – Featured artist at the “Blue Note” in Beirut, Lebanon as well as numerous other clubs in Italy and Spain and at the year 2000 Jazz & Image Festival at Villa Celimontana. Performed with his quartet on the “M.S. Dynasty,” a Carnival Lines Cruise ship. Produced and performed in the “Tribute to Stanley Turrentine” concert in Philadelphia. In August 2001, he performed for President Bill Clinton at the “Harlem Welcomes Clinton” celebration. The Barry Harris/Charles Davis Quintet appeared several times at “Sweet Basil” in New York City. They continue to perform together in various venues including yearly appearances at “Birdland.” In August 2004, they performed in the 50th Anniversary of the Newport Jazz Festival. He was a featured artist at the 14th Annual Jazz Festival in Badajoz, Spain and was a member of the Walter Booker Quintet. He performed with his quartet at New York's Rubin Museum of Art, performed in the Netherlands and toured Denmark and Israel. In addition to performing and recording with the guitarist Roni Ben-Hur and the El Mollenium Band (featuring the music of Elmo Hope), In 2009 he toured Germany, Austria,Switzerland and Italy with the Charles Davis Allstars:  A Tribute to Kenny Dorham and in 2010 this quintet performed in Germany, Austria, France, Italy, Slovenia and Croatia.  Charles also performs with the Spirit of Life Ensemble and his own quartet, featuring Tardo Hammer (piano), Lee Hudson (bass) and Jimmy Wormworth (drums) in the United States and Europe.

Charles is a saxophone instructor of private students from The New School, a teacher at the Lucy Moses School and for over 25 years has been an instructor at the Jazzmobile Workshops. He has made eight of his own albums and is featured on over 100 recordings.  Some of his CD's as a leader include  “Blue Gardenia,” with Cedar Walton on piano, Peter Washington on bass and Joe Farnsworth on drums, released on Reade Street Records; “Land of Dreams,” with Tardo Hammer, Lee Hudson and Jimmy Wormworth, released in 2007 on Smalls Records; and "Our Man in Copenhagen," released in October 2008, on Fresh Sound Records, with Sam Yahel, Ben Street and Kresten Osgood on which they play the music of Bent Jaedig. Just released in 2010 is "The Charles Davis Allstars: A Tribute to Kenny Dorham with Tom Kirkpatrick on trumpet, Claus Raible on piano, Giorgos Antoniou on bass and Bernd Reiter on drums.  This CD was recorded live at the Bird's Eye in Basel,Switzerland.

Get the latest news from Reade Street